Are we seeking God for what He can do for us? Or for who He is?

1 chronicles 16:11 Seek the Lord and His strength; seek his presence continually!

There’s one thing that we need and that is God, you would not have been reading this devotional if you were not seeking God or seeking something from Him today.

This verse tells us that we seek God for what He can do and also for who He is.

Why does the Word tell us to “Seek His strength”?

Why does the Word tell us to “Seek His face continually”?

We don’t need His presence just today, but day after day, continually seeking after the face of God.

Why His presence is so important:

Psalm 16:11 “You make known to me the path of life; in your presence there is fulness of joy; at your right hand are pleasures forevermore.”

O Lord, how many are my foes! Many are rising against me; many are saying of my soul, “There is no salvation for him in God.”

But You, O Lord, are a shield about me, my glory, and the lifter of my head.

I cried aloud to the Lord, and he answered me from his holy hill.

I lay down and slept; I woke again, for the Lord sustained me.”

In this text we read of a story of Absalom, David’s son who has rebelled against God and his own father to overthrow David on his throne in Jerusalem. Terrified as David was, David knew who to call in this troubled time. Even those of David’s closest friends would too forsake him and join the ranks of his son. Many thought that David was to far gone for God’s salvation but little do they know that the presence of trouble doesn’t prove the absence of God.

The presence of trouble doesn’t prove the absence of God.

God is the lifter of not only our heads but everything that involves life. He wants to lift our attitude, our hope, our hearts, our minds, our burdens, our feeble hands and most of all our burdens.

When you feel troubled, who do you call? Your spouse? Your pastor? Maybe a close friend? But remember who the lifter of our souls are and that is the Lord.

He is waiting for you, to call out to Him. He will always answer.

Hebrews 4:15 “For we have not a high priest that cannot be touched with the feeling of our infirmities; but one that hath been in all points tempted like as we are, yet without sin.”

If I were to ask you a question about the Lord, what would your response be? Would it be the same question that David is asking in the Psalm 113?

No one is like Him and no one could take His place — Isaiah 45:5 “I am the LORD, and there is no other, besides me there is no God.”

Our lives shouldn’t have to have a reason to give Him praise, from the rising of the sun to its setting, whatever happens, let us sing and let us sing “Who is like the Lord?” 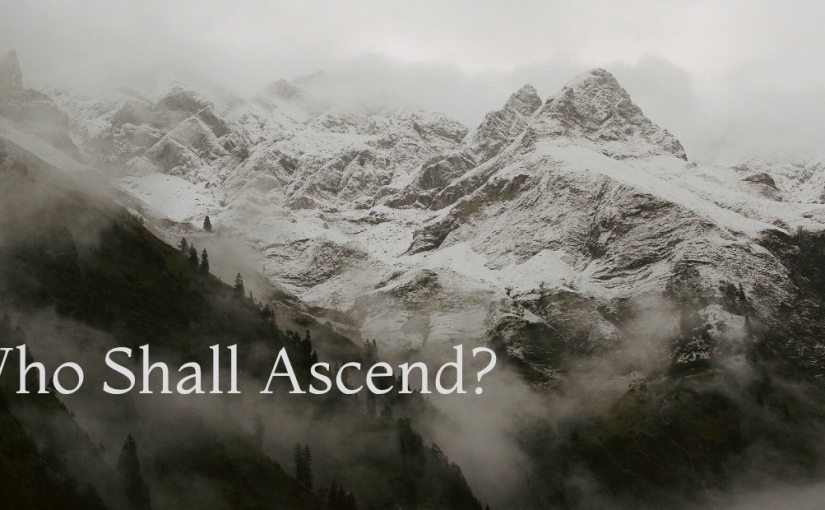 “Who shall ascend the hill of the Lord? And who shall stand in his holy place? He who has clean hands and a pure heart, who does not lift up his soul to what is false and does not swear deceitfully. He will receive blessing from the Lord and righteousness from the God of his salvation.

— We don’t approach God with good works so that no man can boast.

We approach Him with a Pure heart

Matt 5:8 Blessed are the pure in heart, for they shall see God.

In the Old Testament before the high priests were able to walk in the Holy place God required consecration. And He still requires it! A setting apart, lets face it, we are not of this World! We are to be salt and light to this generation.

This is living the Christian way; keeping a pure heart.

But thank God that through Jesus we are clothed in His Righteousness!

“For our sake he made him to be sin who knew no sin, so that in him we might become the righteousness of God.”

God desires relationship. He wants to be part of every aspect of our lives. He wants to come in and fill every void space in our minds, our hearts and soul. All He requires is for us to keep the doors to our hearts wide open.

“Lift up your heads, O gates!
And be lifted up, O ancient doors,
that the King of glory may come in.”

Lord I give you control over every area of my life. Every ancient door in my life, and stubborn entrance within my heart, my mind, my body and soul be lifted so that you can come in and have your way.

Q: In whom does your strength come from?

A: We find strength in the Word of God.

Now when David and his men came to Ziklag on the third day, the Amalekites had made a raid against the Negeb and against Ziklag. They had overcome Ziklag and burned it with fire 2 and taken captive the women and all who were in it, both small and great. They killed no one, but carried them off and went their way. 3 And when David and his men came to the city, they found it burned with fire, and their wives and sons and daughters taken captive. 4 Then David and the people who were with him raised their voices and wept until they had no more strength to weep. 5 David’s two wives also had been taken captive, Ahinoam of Jezreel and Abigail the widow of Nabal of Carmel. 6 And David was greatly distressed, for the people spoke of stoning him, because all the people were bitter in soul, each for his sons and daughters. But David strengthened himself in the Lord his God.

WHEN YOU TAKE THE SPIRITS LEADING INSTEAD OF YOUR OWN UNDERSTANDING AND ALL YOU HAVE IS HIS WORD TO LIGHT UP THE PATH, YOU’RE GOING TO THE PLACE WHERE HE WANTS YOU!

“But David strengthened himself in the Lord his God”

It cuts through sin

It cuts off addictions

THINGS BEGIN TO CHANGE WHEN YOU FIND STRENGTH IN HIS WORD!

“But those who wait on the Lord

Shall renew their strength;

They shall run and not be weary,

They shall walk and not faint.”

WHEN WE WAIT ON HIM, HE WILL RENEW OUR STRENGTH, IT’S ONLY IN HIS WORD THAT ARE STRENGTH IS FOUND.

That is how it is with the Lord, David says in Psalms 63:5

“Daily I will worship you passionately and with all my heart. My arms will wave to you like banners of praise. I overflow with praise when I come before you, for the anointing of your presence satisfies me like nothing else. You are such a rich banquet of pleasure to my soul. – Passion Translation

Q: So What is The Purpose of His Presence?

A: He, the Holy Spirit keeps you from wandering and causes you to separate (consecrate) anything else that is trying to take His place.

18 While walking by the Sea of Galilee, he saw two brothers, Simon (who is called Peter) and Andrew his brother, casting a net into the sea, for they were fishermen.19 And he said to them, “Follow me, and I will make you fishers of men.”[a]20 Immediately they left their nets and followed him. 21 And going on from there he saw two other brothers, James the son of Zebedee and John his brother, in the boat with Zebedee their father, mending their nets, and he called them. 22 Immediately they left the boat and their father and followed him.

There was something about Him that made these men leave behind their lives their livelihoods all that they have ever know they threw it away for the cause of Christ. What was it? They saw His Presence so valuable.

“You make known to me cthe path of life;

in your presence there is dfullness of joy;

at your right hand are epleasures forevermore.”

Do you see His Presence so valuable and so priceless?