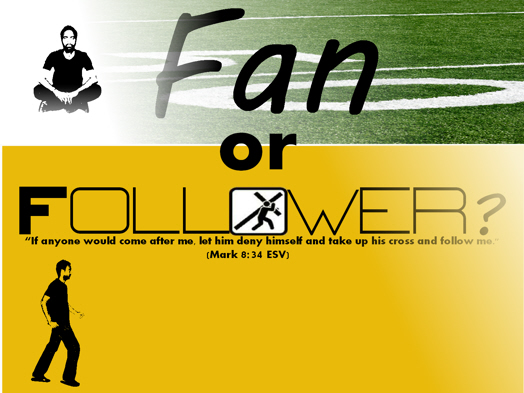 So many times we can find ourselves becoming a fan of Jesus instead of a follower of Jesus.

The concept of a forerunner runs throughout the Bible. We could say that Adam was a forerunner, as well as Noah, Abraham, Moses, Elijah, John the Baptist, and of course, Christ. Notice that each of these forerunners had followers—their firstfruits. Adam had Eve and their sons and daughters that followed them. Noah had his wife and family. Abraham had Sarah and Lot, and later were added Ishmael and Isaac, and then Jacob and his children. Moses had Aaron and Miriam and then all the children of Israel. Elijah led to Elisha. John the Baptist proclaimed the coming of Christ, who called His disciples—us.
Definition of follower – Habitually follow regardless of the price, even to death. Not just when it is convenient, easy and popular.
Q: What does it mean to be a follower of Christ?
From the chapter of Matthew 4 we find out that as Jesus was walking by the sea of Galilee, he saw two brothers, Simon (who is called Peter) and Andrew his brother, casting a net into the sea, for they were fisherman. And Jesus said to them, “Follow Me, and I will make you fishers of men.”
A: We must surrender ALL
– There is a cost
Peter and Andrew paid that cost.
Sacrificing what they had for the cause of Christ.
These men who had their own life and their own way of doing things, fishing was their way of life. But when the master had walked by they saw Him and immediately left with no hesitations of coming back.
What was it like? What appealed to these men as if He was no ordinary man who Peter and Andrew would just stop what they were doing and become a follower? We must to answer this question to ourselves. There is no life outside of Christ that is fulfilling. We all have been on that other side of the fence, and as for me speaking, it was horrible. We must deny ourselves daily.

“Then Jesus told his disciples, “If anyone would come after me, let him deny himself and take up his cross and follow me”.

These words are hard to swallow some days, when the flesh is fighting with your spirit. The fame that puts the spot light on ourselves that forms the pride that comes before destruction is a dangerous circumstance that we can find ourselves in at some points in our life if we are not careful.

He didn’t say “…If anyone could come after me”, it’s not that it’s impossible to be with Him but only “if” we are willing. “The spirit is willing but the flesh is weak” Mark 14″38

What we, ourselves want out of this life, will be only through Him, to follow Him with everything. While some choose to be a fan of Him that would follow Him “if” they would deny themself.

Q: How do we deny ourselves?

A: To not rely on ourselves

We must walk by faith and not by sight.

WHO ARE YOU FOLLOWING? 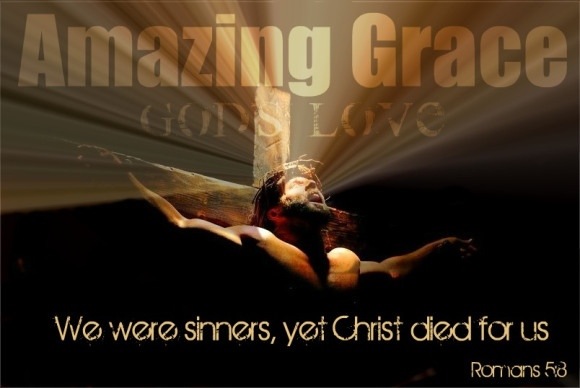 The hymn “Amazing Grace” is one of the most recognizable songs in the English-speaking world. Written by John Newton as a personal poem of conversion, it is sung annually at an estimated 10 million times. It reminds each and every one, that each and every day that God has given us Grace through His Son Jesus that we might turn from our disgrace and embrace the grace which lies in Christ. Enjoy the rest of the reading of the autobiography of John Newton.

According to the Dictionary of American Hymnology, “Amazing Grace” is John Newton’s spiritual autobiography in verse. In 1725, Newton was born in Wapping, a district in London near the Thames. His father was a shipping merchant who was brought up as a Catholic but had Protestant sympathies, and his mother was a devout Independent unaffiliated with the Anglican Church. She had intended Newton to become a clergyman, but she died of tuberculosis when he was six years old. For the next few years, Newton was raised by his emotionally distant stepmother while his father was at sea, and spent some time at a boarding school where he was mistreated. At the age of eleven, he joined his father on a ship as an apprentice; his seagoing career would be marked by headstrong disobedience.

As a youth, Newton began a pattern of coming very close to death, examining his relationship with God, then relapsing into bad habits. As a sailor, he denounced his faith after being influenced by a shipmate who discussed Characteristics of Men, Manners, Opinions, Times, a book by the Third Earl of Shaftesbury, with him. In a series of letters he later wrote, “Like an unwary sailor who quits his port just before a rising storm, I renounced the hopes and comforts of the Gospel at the very time when every other comfort was about to fail me.” His disobedience caused him to be pressed into the Royal Navy, and he took advantage of opportunities to overstay his leave and finally deserted to visit Mary “Polly” Catlett, a family friend with whom he had fallen in love. After enduring humiliation for deserting, he managed to get himself traded to a slave ship where he began a career in slave trading.

Newton often openly mocked the captain by creating obscene poems and songs about him that became so popular the crew began to join in. He entered into disagreements with several colleagues that resulted in his being starved almost to death, imprisoned while at sea and chained like the slaves they carried, then outright enslaved and forced to work on a plantation in Sierra Leone near the Sherbro River. After several months he came to think of Sierra Leone as his home, but his father intervened after Newton sent him a letter describing his circumstances, and a ship found him by coincidence. Newton claimed the only reason he left was because of Polly.

While aboard the ship Greyhound, Newton gained notoriety for being one of the most profane men the captain had ever met. In a culture where sailors commonly used oaths and swore, Newton was admonished several times for not only using the worst words the captain had ever heard, but creating new ones to exceed the limits of verbal debauchery. In March 1748, while the Greyhound was in the North Atlantic, a violent storm came upon the ship that was so rough it swept overboard a crew member who was standing where Newton had been moments before. After hours of the crew emptying water from the ship and expecting to be capsized, Newton and another mate tied themselves to the ship’s pump to keep from being washed overboard, working for several hours. After proposing the measure to the captain, Newton had turned and said, “If this will not do, then Lord have mercy upon us!” Newton rested briefly before returning to the deck to steer for the next eleven hours. During his time at the wheel he pondered his divine challenge.

About two weeks later, the battered ship and starving crew landed in Lough Swilly, Ireland. For several weeks before the storm, Newton had been reading The Christian’s Pattern, a summary of the 15th-century The Imitation of Christ by Thomas à Kempis. The memory of the uttered phrase in a moment of desperation did not leave him; he began to ask if he was worthy of God’s mercy or in any way redeemable as he had not only neglected his faith but directly opposed it, mocking others who showed theirs, deriding and denouncing God as a myth. He came to believe that God had sent him a profound message and had begun to work through him.

Newton’s conversion was not immediate, but he contacted Polly’s family and announced his intentions to marry her. Her parents were hesitant as he was known to be unreliable and impetuous. They knew he was profane, but they allowed him to write to Polly, and he set to begin to submit to authority for her sake. He sought a place on a slave ship bound for Africa, and Newton and his crewmates participated in most of the same activities he had written about before; the only action he was able to free himself from was profanity. After a severe illness his resolve was renewed yet he retained the same attitude about slavery as his contemporaries. Newton continued in the slave trade through several voyages where he sailed up rivers in Africa — now as a captain — procured slaves being offered for sale in larger ports, and subsequently transported slaves to North America. In between voyages, he married Polly in 1750 and he found it more difficult to leave her at the beginning of each trip. After three shipping experiences in the slave trade, Newton was promised a position as a captain on a ship with cargo unrelated to slavery, when at thirty years old, he collapsed and never sailed again. – exerted from autobiographies of John Newton @ wikipedia.com